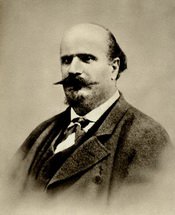 
(1815-1878)
Temistocle Solera was an Italian poet and librettist. He studied in Vienna, and later on in Milan and Pavia too. His first opera assignment was to revised a text by Antonio Piazza for Verdi, which became Oberto, Conte di San Bonifacio (1839). This was followed by four more librettos in quick succession, of which he set two to music himself. It was Verdi's Nabucco that would establish his reputation, and he would continue to collaborate with Verdi on the operas I Lombardi, Giovanna d’Arco and Attila. Before he could finish the latter work, however, he followed the soprano Teresa Rosmina to Spain, where he directed productions in Madrid, and it was Franceso Maria Piave who eventually finished it. Solero returned to Italy in his later years and engaged in political activities there. Also a composer, he wrote a cantata (La melodia) as well as songs and church and chamber music.