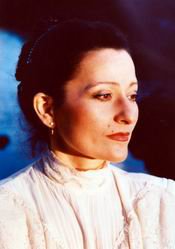 Born in Szeged, Ilona Tokody began her music education in her home town with Valéria Berdál before enrolling at Budapest's Ferenc Liszt Academy of Music, where she was taught by Dr. Jenő Sipos. She won the Kodály Singing Competition in 1972 and the Erkel Singing Competition in 1976. In that same year, she joined the Opera as a contracted member. As a young artist on the cusp of her career, her initial debuts in works by contemporary Hungarian composers were highly acclaimed. She has collaborated with numerous great directors – including Franco Zeffirelli, Otto Schenk and Götz Friedrich – and conductors, such as Claudio Abbado, Giuseppe Sinopoli and Giuseppe Patané.
Over the course of her career, she has primarily sung the leading roles in Italian and French operas, but she has also been engaged for oratorios and for song and aria recitals. Her talent was also quickly noticed abroad. In 1979, her Wiener Staatsoper debut as Mimì in La bohème was such a triumph that she then went on to sing a whole series of principal roles in Vienna: the title role of Suor Angelica, Leonora (La forza del destino), Amelia (Simon Boccanegra), Maddalena (Andrea Chénier), the title role of Manon Lescaut, and Rachel in Halévy's La Juive. It was in the latter opera that she first partnered with José Carreras, who set her career as an opera singer going and later her concert career as well. She first sang with Plácido Domingo in 1986, at Deutsche Opera Berlin, Verdi's Otello. She also racked up huge triumphs in other major European cities (Barcelona, Madrid, Bonn, Catania, Rome, Naples, Stuttgart, Hamburg) and Japan. She has sung together with such international stars as Fiorenza Cossotto, Elena Obraztsova, Luciano Pavarotti, Juan Pons and Piero Cappuccilli, and also got to sing in Richard Strauss's Guntram in New York's Carnegie Hall. In 1988, she made her debut with the audience of the Metropolitan Opera in the roles of Nedda (Pagliacci) and Micaëla (Carmen). She has also been invited to perform in a number of other cities in North and South America, including Boston, Los Angeles, Houston, San Francisco and Buenos Aires. It was in Buenos Aires, at the Teatro Colón, where she sang her one hundredth Mimì alongside Luciano Pavarotti.
She has regularly recorded albums with both Hungarian and international music labels, including of four world premieres: Boito's Nerone, Respighi's La fiamma, Richard Strauss's Guntram and Mascagni's Iris. Several recordings of hers appeared in 1983, including her first solo album, titled Great Soprano Arias (with conductor András Mihály), Puccini's Suor Angelica (conducted by Lamberto Gardelli) and Brahms's Ein deutsches Requiem (conducted by János Ferencsik). The year 1991 saw the release of her first CD with the American label Legato Classics, making her the first Hungarian singer to appear in the series. This CD was swiftly followed by a release from VAI Audio, another American label.
Further roles: Liù (Turandot), Lauretta (Gianni Schicchi), Fiordiligi (Così fan tutte), Aida, Leonora (Il trovatore), Élisabeth de Valois (Don Carlos), Cio-Cio san (Madama Butterfly), Tatyana (Eugene Onegin), Tosca, Melinda (Bánk bán).