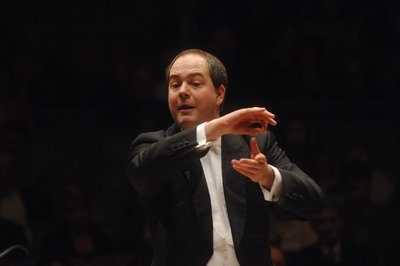 Born in Budapest in 1970, György Vashegyi commenced his music studies as an instrumentalist. At age 18 he won admission to the conducting programme at the Ferenc Liszt Academy of Music, where he graduated with top honours in 1993 after studying under Ervin Lukács. He has also participated in conducting master classes taught by John Eliot Gardiner and Helmuth Rilling on several occasions. In 1990 he established the Purcell Chorus in Budapest, and a year leader founded the Orfeo Orchestra, also based in the Hungarian capital. Vashegy primarily conducts his own ensembles, but also regularly appears as a guest conductor with other early music ensembles (such as Concerto Armonico, Capella Savaria and Musica Aeterna) and symphony orchestras (the Hungarian Radio and Television Symphony Orchestra, Budapest Philharmonic, the Kolozsvár (Cluj-Napoca) Philharmonic Orchestra, MÁV Symphony Orchestra, the Pannon Philharmonic in Pécs, the Miskolc Symphony Orchestra, the Hungarian Telecom Symphony Orchestra [now Concerto Budapest], Sinfonietta Hungarica, Dohnányi Orchestra Budafok, etc.) In September of 1998, he conducted the Romanian premiere of Mozart's Idomeneo at the Kolozsvár State Hungarian Opera, and in May 2000, at the helm of both the MÁV Symphony Orchestra and the Hungarian Radio and Television Symphony Orchestra, conducted the concert-version world premiere of Levente Gyöngyösi's opera The Stork Caliph in Budapest. He made his Opera House debut in August of 2000, leading the Orfeo Orchestra in (as a premiere production for the Opera festival) Haydn's L'infedeltà delusa, the first opera performance using period instruments in the history of the Opera House. Since then, he has been a regular guest at the Hungarian State Opera, having also rehearsed and conducted the Opera House premiere of Gyöngyösi's The Stork Caliph in May of 2005.