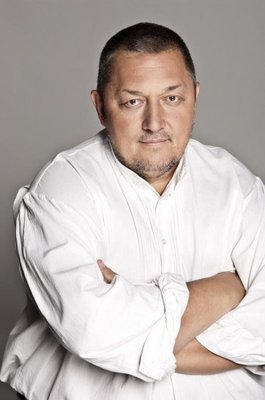 Attila Vidnyánszky was born in the Ukrainian city of Beregszász (Berehove) in 1964. He earned his bachelor's degree in philosophy at the Ungvár (Uzhhorod) State University in 1985. After teaching literature and history for two years, he went on to earn his master's at the Kiev National I. K. Karpenko-Kary Theatre, Cinema and Television University. The founding artistic director of the Beregszász Hungarian National Theatre, he also worked at the Lesya Ukrainka National Academic Theatre in Kiev and at theatres in Slovakia and the former Yugoslavia, and has been directing in Hungary since 1999. In 2004, he was appointed chief director at the Hungarian State Opera, and two years later he would become the artistic director, and eventually managing director, of the Csokonai National Theatre in Debrecen. He has won numerous professional recognitions, including the Mejerhold Award for his production of Three Sisters. He has been the general director of the National Theatre since 2013. He has directed more than 80 productions at 20 different theatres, including the Lesya Ukrainka National Academic Theatre of Russian Drama, Budapest's National Theatre, the Hungarian Theatre of Pest, the New Theatre, the Hungarian State Opera and the Csokonai National Theatre in Debrecen, as well as in Slovakia, Serbia and Croatia. His productions have been featured, and have won awards, at major European festivals. From 1990 to 1997, he taught acting technique at the Kaprenko-Kary State University of Theatre and Film in Kiev. He has been a titular professor at the University of Kaposvár since 2011 and was the director of the University of Kaposvár's Theatre Institute from 2012 to 2013. He has served as the deputy rector of the university's faculty of the arts since 2013 and as a full professor since 2016. He returned to the Hungarian State Opera in September 2017 to direct Bánk bán.
A member of the Hungarian Academy of Art since 2005, he helped found the Hungarian Theatre Association in 2008 and has served as the organisation's president since then. His work has been recognised with numerous distinctions, including the Theatre Critics' Award in 2004 (for his production of Roberto Zucco), the Silver Cross of the Order of Merit of the Republic of Hungary in 2005, the Kálmán Nádasdy Award in 2006, the Mejerhold Award in 2009, the Kossuth Prize in 2011 and the Sándor Hevesi Award in 2016.
At the Hungarian State Opera, he has directed Janáček's Jenůfa (2004), Shostakovich's Lady Macbeth of the Mtsensk District (2005), Wagner's Die Meistersinger von Nürnberg (2006), three one-acts – Renard, Mavra and L'Histoire du soldat – by Stravinsky (2007), Verdi's La forza del destino (also in 2007) and Erkel's Bánk bán (2017).