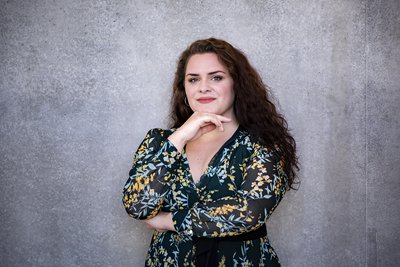 Born in Budapest, Anna Kissjudit began her studies with Olga Szilágyi. In 2020, she earned her master’s degree from the Franz Liszt Academy of Music under the guidance of Katalin Halmai and Imola Pogány. After achieving outstanding results in numerous prestigious competitions, she was invited to participate in the 2016 Budapest Spring Festival, where she sang the role of Aristea in Antonio Cesti’s opera Orontea. In April and December of 2017 she took part in Thomas Quasthoff’s master class in Berlin.

In 2017, she was featured in the Tenth International Saint Gellért Festival, singing the alto part in Beethoven’s Ninth Symphony. She made her Erkel Theatre debut in 2019, in the role of the blind La Cieca in a production of Ponchielli’s La Gioconda directed by András Almási-Tóth and conducted by Gergely Kesselyák.

She first appeared at the Budapest Wagner Days festival at Müpa Budapest in 2019, as Schwertleite in Die Walküre. In the 2020/21 season, she has joined the opera studio of Berlin’s Staatsoper Unter den Linden and won scholarships from the  Liz Mohn Cultural Foundation and Oper in Berlin. In August 2021, she will get to take part in the Bayreuth Festival as the winner of the Wagner Society’s scholarship.

NEW YEAR'S AT THE OPERA HOUSE