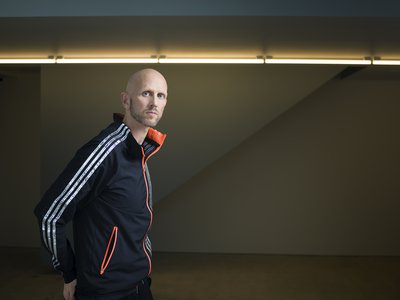 Born in 1970, Wayne McGregor CBE is a multi-award winning British choreographer and director, internationally renowned for trailblazing innovations in performance that have radically redefined dance in the modern era. Driven by an insatiable curiosity about movement and its creative potentials, his experiments have led him into collaborative dialogue with an array of artistic forms, scientific disciplines, and technological interventions. The startling and multi-dimensional works resulting from these interactions have ensured McGregor’s position at the cutting edge of contemporary arts for over twenty-five years.

Wayne McGregor is Artistic Director of Studio Wayne McGregor, a creative nexus that pushes the frontiers of physical intelligence through dance, design and technology. McGregor’s work is rooted in dance, yet encompasses a variety of genres including technology, visual art, film, opera and education, as well as Company Wayne McGregor, his own touring company of dancers. Studio Wayne McGregor supports an eclectic network of creators, including – but not limited to – dancers, writers, composers, coders, scientists and software engineers. The space is based at Here East in Queen Elizabeth Olympic Park, and is designed to spark creativity, expression and making.

Company Wayne McGregor is McGregor’s ensemble of highly skilled dancers. Founded in 1993, this was the original instrument through which McGregor evolved his distinctive visual style, revealing the movement possibilities of the body in ever more precise degrees of articulation. McGregor has made over thirty works for the company and today it continues to be his laboratory for ambitious and experimental new choreography, touring his work across the UK and around the world. Company Wayne McGregor is Resident Company at Sadler’s Wells, London.

Wayne McGregor is Resident Choreographer at The Royal Ballet, where his productions reconfigure the classical language, and is the Director of Dance for the Venice Biennale until 2024. He is also regularly commissioned by and has works in the repertories of the most important ballet companies in the world, including Paris Opera Ballet, New York City Ballet, Bolshoi Ballet, NDT 1, Australian Ballet, Royal Danish Ballet and San Francisco Ballet.

Wayne McGregor is Professor of Choreography at Trinity Laban Conservatoire of Music and Dance, has Honorary Doctorates from Plymouth University, University of Leeds, University of Chester, and UAL and is part of the Circle of Cultural Fellows at King’s College London. In 2017 he was awarded an Honorary Fellowship of the British Science Association. McGregor topped the list for dance in The Progress 1000 celebration of London’s most influential people in 2018.

McGregor's work has earned him a multitude of awards including four Critics' Circle National Dance Awards, two Time Out Awards, two South Bank Show Awards, two Olivier Awards, a prix Benois de la Danse and two Golden Mask Awards. In 2011 McGregor was awarded a CBE for Services to Dance and in 2021 was honoured with a Lifetime Achievement Award at the Prix de Lausanne.

Most recently Wayne McGregor premiered No One is an Island in collaboration with Random International and BWMi; The Dante Project for The Royal Ballet; fashion film Torus with SHOWStudio; Living Archive and Autobiography for Company Wayne McGregor; Orpheus and Eurydice for English National Opera and Company Wayne McGregor; Sweet Charity for Donmar Warehouse; AfteRite for American Ballet Theatre; and an immersive performance for the screen Winged Bull in the Elephant Case for BBC Performance Live.